Fake ID Sites are everywhere on the web. I’m here to tell you some of them are useless, and worse, most of them are scams. 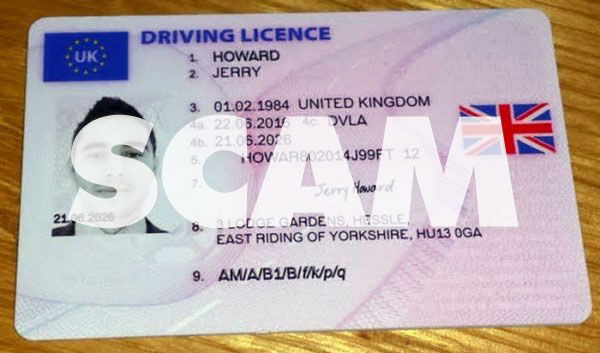 I’m here also, to tell you not to waste your time, or your money.

How are some Fake ID Sites useless?

If the site actually delivers a fake ID to you, it will be useless for what you want it for. Lying about your age, getting into clubs underage, buying booze, driving a car if you failed your driving test for the tenth time; whatever you want the fake ID to achieve, you’re going to be sorely disappointed.

The sites which say they are selling fake UK driving licences on the clearnet (where you are now) are actually not selling them. Instead, they’re selling cheap imitation cards which don’t look anything like the real DVLA-issued licence, aren’t the right colour and don’t even say “Driving Licence” on them. These are novelty fake IDs and not worth the money.

Getting one of these cards will not get you into a club because the cards will fail at the scanner. Every bouncer, doorman or security worker up and down the UK has seen these cards and probably has a stack of fake IDs taken off people just like you over the years.

There have been novelty fake ID sites around since the start of the web and probably before. Not a single one will deliver a card that works. I list fakeidentification.co.uk, fakeid.co.uk and myfakeid.biz here. All the same quality of cards, not worth the money.

(All links are cloaked so these sites don’t get any traffic or SEO boost).

How can they get away with this?

It’s not illegal to sell a bad product. The “fake driving licences” are designed in such a way that they’re different enough from the real thing to avoid breaking the law on fake ID. Some sites even have disclaimers on the cards that you can’t scrape off which say they are fake.

How are most Fake ID Sites scams?

Let’s look at the steps involved in making a fake ID site that actually sells real fake ID, if that is such a thing.

You’ve now invested loads of time and money into a site that is very illegal and hard work to run.

For an upfront investment of maybe $1000 overall in a template website, some shitty SEO spam and a bit of your time, you’ve built a site that runs like clockwork, duping idiots out of their money while you sleep.

Let’s look at a scam that’s been running for years… UK-ID.com. (All links are cloaked so these sites don’t get any traffic or SEO boost). I’ve tried to buy a fake ID off these f**kers before. The clever thing is that they will reply to your emails with questions right up until you send them money in the form of bitcoin. Then they block you, and you’re out of luck.

I think they’ve been running since at least 2009, going from this archive.org screenshot. The tactic is to copy pictures and content from some other fake UK driving licence site, so it looks legitimate, and to reply to you so you get lulled into a false sense of security. UK-ID.com stole the images from UKFakes.is (now gone, probably a scammer also). I can even prove it to you.

Here’s the Internet Archive for UKFakes.is from 2017.

You can clearly see they say:

UK-ID.com just copied all the images and added “-ID.com” to the right of “UK” on the cards. 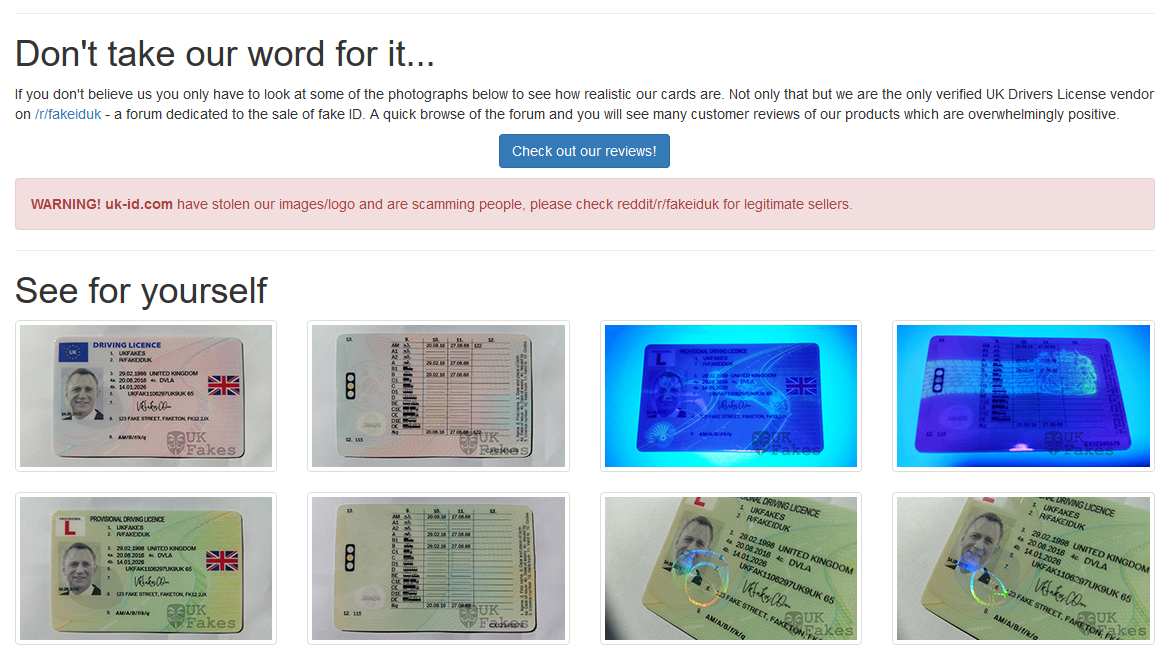 Below I’ve found the original UK Fakes card, and compared it to the uk-id.com copy.

The picture and details are identical. The only thing they changed is the signature and added “-ID.com” to the watermark. I’ve found loads of these sites on the web and they all have similar style and content. The one common thread is they all take bitcoin or other crypto. Once you send it, it’s gone forever. The UK ID site has scammed over $100,000 in the last year – I can prove this.

How can they get away with this?

Because nobody gives a shit. If you stupidly send these scamming bastards £50 of your hard earned money, you deserve everything you get. There’s no police complaint form for “ehh yeah I got scammed on the internet”. Plus, there is a constant supply of new, gullible morons who don’t do their research and send more money. They’ve been at it for over 10 years ffs.

What about these guys who say they work for the DVLA?

Recently, I’ve seen sites pop up saying that they work in the DVLA and that they sell “bulletproof” fake UK driving licenses which are registered in the DVLA computer. This is a load of shit. There was a piece on the BBC news site about these fake ID scam sites a while back (11th September 2020). I reckon these are just pure scams and they seem to be raking it in. Any site that mentions Whatsapp as a communication method is 100% a scam, run by Nigerian Prince type guys in a damp flat.

No one has illegal access to the DVLA and no one is selling said access. Any fake ID no matter how good it looks will always fail a driving license validity check at the database level.